Buying buildings can be a better deal than leasing—but federal agencies may not have the funds to buy up front. For example, the General Services Administration leased a headquarters building for the Department of Transportation for 14 years before DOT could afford to buy. Buying up front might have saved $1.2 billion.

In 2018, a fund was proposed to front agencies the money to buy buildings and allow the agencies to pay over 15 years. A related bill was introduced to Congress in May 2021.

We recommended that GSA analyze how such a fund could affect its overall finances. Federal real property management is on our High Risk List. 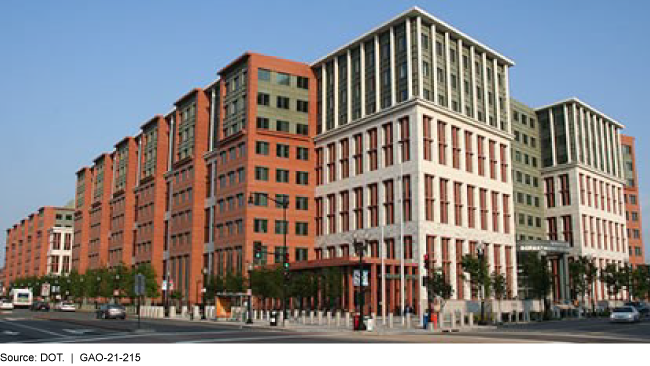 Federal agencies have long struggled to obtain full, upfront funding for capital investments to acquire and maintain federal buildings. GAO's review of three selected federal capital projects suggests that such funding might have benefitted those projects and their agencies. For example, GAO estimated that full, upfront funding for the Department of Transportation's headquarters building might have saved up to $1.2 billion by allowing construction of a new headquarters versus what did occur—the General Services Administration (GSA) leased space for years and eventually purchased the building that it had leased.

In an effort to improve federal agencies' access to full, upfront funding for capital investments, the Office of Management and Budget (OMB) proposed the $10 billion Federal Capital Revolving Fund Act of 2018 (Capital Fund). The Capital Fund, which would be administered by GSA, could provide upfront funding for certain capital projects of $250 million or more, with agencies repaying the Capital Fund over a 15-year period. While the 2018 Capital Fund proposal has not been enacted, a Capital Fund was referenced in each of the President's budgets since 2019 and in a bill that was introduced in the Senate in May 2021.

During the course of GAO's review, officials from GSA and OMB expressed different perspectives on the proposed Capital Fund, and how it might affect the existing Federal Buildings Fund (Buildings Fund) is unclear. GSA officials said that the proposed Capital Fund could divert revenue away from the existing Buildings Fund, which receives rent from GSA tenant agencies and from which GSA pays maintenance and repair costs. OMB officials told us that the Capital Fund could benefit the Buildings Fund by promoting federal ownership over leasing and possibly adding assets to GSA's inventory. GAO identified additional circumstances in which the Capital Fund could affect the Buildings Fund. For example, while the tenant agency would pay operating costs during the first 25-years, the proposal does not directly address what would occur if GSA incurred significant repair costs during this period. As GSA would administer the Capital Fund and manage the Buildings Fund, it is in the best position to analyze when these circumstances might occur and their potential scope as well as how the two funds might interact. Identifying and communicating the possible effects would help OMB and Congress more fully consider legislative proposals.

Since 2003, federal real property management has been on GAO's High-Risk List, in part due to upfront- funding challenges. If enacted, the Capital Fund could provide upfront funding to agencies for certain projects to acquire, construct, or renovate buildings and other federal real property. The existing Buildings Fund funds such projects and the operations and maintenance needs of GSA's portfolio.

GAO was asked to review the Capital Fund proposal. This report: (1) describes how federal agencies might have used expanded access to full, upfront funding had it been available, for three selected projects and (2) assesses stakeholder views on the proposed Capital Fund and whether it would affect the Buildings Fund.

GAO is recommending that GSA identify the potential effects of the proposed Capital Fund on the Buildings Fund and communicate the analysis to OMB and Congress. GSA agreed with the recommendation.