Election officials faced unprecedented challenges in the 2020 federal election cycle. We surveyed them for their perspectives on those challenges and how they used $400 million in CARES Act funds for pandemic-related election issues.

We reported on the responses we got from 43 states and a nationally representative sample of local jurisdictions. For example: 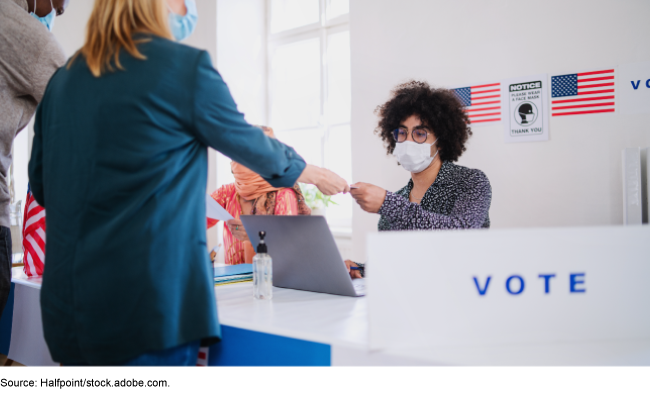 GAO surveyed state election offices and local election jurisdictions about steps they took to prepare for and conduct the 2020 elections during the pandemic. The surveys asked questions on steps and challenges in five areas: absentee/mail voting, in-person voting, election supplies, election worker recruitment and training, and voter education and outreach. GAO received survey responses from 43 states and 407 local jurisdictions.

Over half of states reported spending CARES Act grants on supplies and equipment, voter education, facilitating absentee/mail voting, and recruiting and training election workers. Most states reported that issues related to grant funding and reporting requirements were challenging, such as submitting required progress reports within 20 days of an election. More than half of local jurisdictions reported spending CARES Act grants on various in-person voting activities, including purchasing protective supplies and cleaning voting locations.

Election officials faced unprecedented challenges in conducting the 2020 elections during the COVID-19 pandemic. The CARES Act provided $400 million in grants for states to use to prevent, prepare for, and respond to issues related to the pandemic for the 2020 federal election cycle. The EAC was responsible for administering the grants. In addition, the EAC serves as a national clearinghouse and resource for the compilation of information and review of procedures with respect to the administration of federal elections.

To address all three objectives, GAO conducted two web-based surveys of election officials. One survey was administered to election offices in all 50 states and the District of Columbia, and achieved a response rate of 84 percent. The other survey was administered to a sample of 829 local election jurisdictions. The survey achieved a weighted response rate of 47 percent, and the design and analysis allows GAO to provide national estimates of the perspectives of local election officials.