Federal decision makers need evidence—such as data and the results of studies—to determine if programs are working as intended and identify potential improvements.

We surveyed about 4,000 federal managers in 2020, and nearly all respondents said they had at least one type of evidence available for their programs. However, many fewer reported that their agencies had sufficient capacity (e.g., staff with skills) to develop and use evidence, or were taking actions to enhance it (e.g., providing training).

We recommended that the Office of Management and Budget work with key partners to use the results of our survey to improve agencies' capacity. 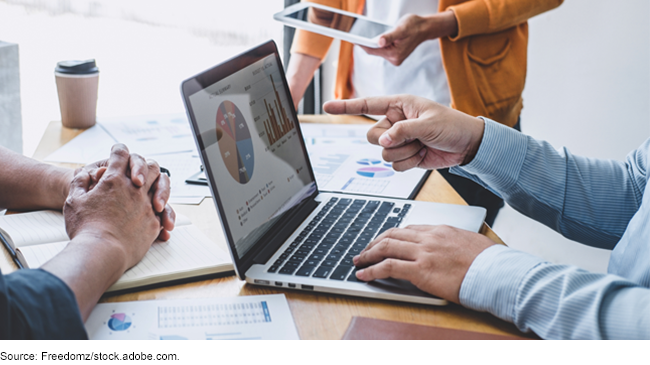 The Foundations for Evidence-Based Policymaking Act of 2018 (Evidence Act) recognizes that federal decision makers need evidence about whether federal programs achieve intended results. According to the Office of Management and Budget (OMB), evidence can include performance information, program evaluations, and other types of data, research, and analysis.

Results from GAO's 2020 survey of federal managers showed that nearly all managers (an estimated 95 percent) reported having at least one type of evidence for their programs. When they had evidence, generally about half to two-thirds reported using it in different decision-making activities, such as when allocating resources.

However, on most questions related to evidence-building capacity, only about one-third to half of managers across the federal government reported that different aspects of capacity (e.g., having staff with relevant skills) were present to a “great” or “very great” extent. Further, when GAO disaggregated these results, it found that reported aspects of capacity varied widely across federal agencies and types of evidence, as illustrated below.

Federal Managers Reporting Presence of Selected Aspects of Evidence-Building Capacity, with the Range of Agencies' Responses

Estimated Percentages Reporting to a “Great” or “Very Great” Extent

OMB, the Office of Personnel Management (OPM), and various interagency councils, such as the Chief Data Officers Council, have taken some actions intended to strengthen federal evidence-building capacity. These include collecting and assessing information from various sources to identify (1) issues to address, and (2) best practices for enhancing capacity to share across agencies.

The Evidence Act created a framework for enhancing the federal government's capacity to build and use evidence in decision-making.

To conduct its work, GAO analyzed results from a survey it administered from July to December 2020 to a stratified random sample of about 4,000 managers at 24 major federal agencies. The survey had a 56 percent response rate. Results can be generalized to the population of managers government-wide and at each agency. GAO also reviewed documents from OMB, OPM, and relevant interagency councils, and interviewed federal officials.

GAO recommends that OMB work with OPM and relevant interagency councils to leverage GAO's survey results as an additional source of information to inform their efforts to enhance federal evidence-building capacity. OMB neither agreed nor disagreed with the recommendation. Two of the surveyed agencies—the Agency for International Development and Small Business Administration—also provided comments related to GAO's survey and evidence-building capacity. The remaining agencies did not comment on the report.