This report provides an update on the federal government’s fiscal condition at the end of FY 2019 and the unsustainable path it is on if policies don’t change.

Publicly held debt rose to 79% of GDP. The Congressional Budget Office and this new report both project it will continue to grow

Interest on the debt is the fastest growing item in the budget; it is projected to be the largest spending category by 2049

The longer action is delayed, the more drastic the changes that will be needed to address the issue

Spending on national debt interest will exceed Medicare, Social Security, and discretionary spending in the years shown below 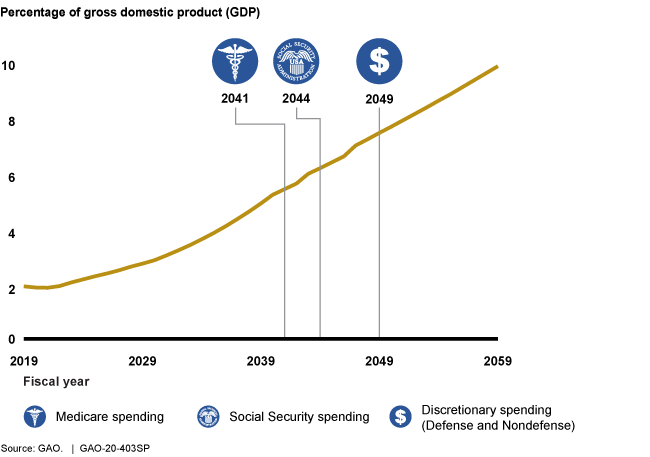 The nation faces serious economic, security, and social challenges that require difficult policy choices in the near term in setting national priorities and charting a path forward for economic growth. This will influence the level of federal spending and how the government obtains needed resources. At the same time, the federal government is highly leveraged in debt by historical norms.

A broad plan is needed to put the federal government on a sustainable long-term fiscal path and ensure that the United States remains in a strong economic position to meet its security and social needs, as well as to preserve flexibility to address unforeseen events. This report describes the fiscal condition of the U.S. government as of the end of fiscal year 2019 and its future unsustainable fiscal path absent policy changes. It draws on the Fiscal Year 2019 Financial Report of the United States Government (2019 Financial Report) and GAO's work, including its audit of the government's consolidated financial statements.

Significant Changes to the Government's Fiscal Condition in Fiscal Year 2019

GAO, CBO, and 2019 Financial Report projections all show that, absent policy changes, debt grows faster than GDP; this is an unsustainable path.

Projected Net Interest and Other Spending as Percentage of GDP 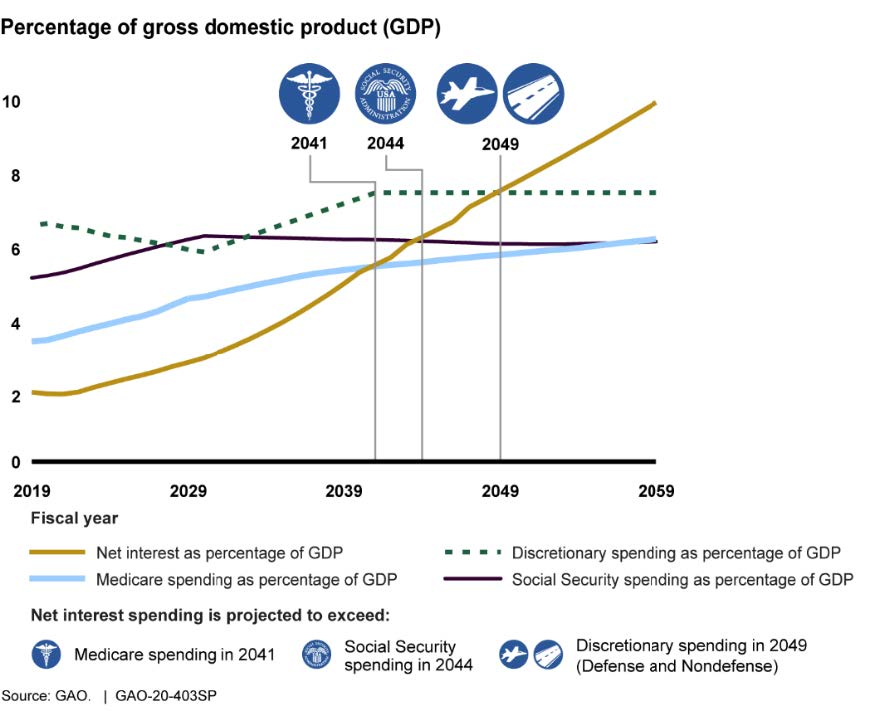 Early Action is Important: GAO, the Congressional Budget Office (CBO), and the 2019 Financial Report state that the longer action is delayed, the greater the changes will have to be. As shown below, major programs are projected to face financial challenges in the future.

Fiscal risks are responsibilities, programs, and activities that may legally commit or create expectations for future spending based on current policy, past practices, or other factors. Risks are Not Fully Accounted for: The federal government faces certain fiscal risks that are not fully accounted for in the budget or long-term fiscal projections, and could lead to future spending increases and higher levels of debt. Examples include the need to resolve the federal government's role in the housing finance market and federal fiscal exposures resulting from natural disasters. A more complete understanding of fiscal risks can help policymakers anticipate changes in future spending and enhance oversight of federal resources.

Debt Limit Is Not a Control on Debt

The debt limit is a legal limit on the total amount of federal debt that can be outstanding at one time. It is not a control on debt but rather an after-the-fact measure that restricts the Treasury's authority to borrow to finance the decisions already enacted by Congress and the President. An Alternative Approach to Managing Debt Is Needed: The debt limit has been suspended through July 2021. At that time, it will need to be suspended again or raised. Failure to increase or suspend the debt limit in a timely manner could undermine the perceived safety of Department of the Treasury (Treasury) securities, resulting in serious negative consequences for the Treasury market and increased borrowing costs. The full faith and credit of the United States must be preserved.

Experts have suggested instituting fiscal rules as an alternative approach to the debt limit. GAO has identified insights that can inform policy deliberations on the potential implementation of fiscal rules. Congress could consider this suggestion as part of a broader plan to put the government on a sustainable fiscal path.

Executive Agencies Have Opportunities to Contribute Toward Fiscal Health

Narrow persistent tax gap: Reducing the gap between taxes owed and those paid could increase tax collections by billions of dollars annually. The average annual net tax gap is estimated to be $381 billion (for tax years 2011-2013).

Improve information on programs and fiscal operations: Decision-making could be improved by ensuring the government’s financial statements are fully auditable and by increasing attention to tax expenditures—tax provisions that reduce tax liabilities. Estimated to collectively reduce tax revenue by approximately $1.3 trillion in fiscal year 2019, tax expenditures are not regularly reviewed and their outcomes are not measured as closely as spending programs’ outcomes.