Census data is used for things like congressional redistricting and to allocate billions each year in federal funds. Consequently, it is necessary that the Census Bureau ensures that the data it collects is accurate and of high quality.

We described the Census Bureau’s plans to resolve data quality issues facing the 2020 Census, like missing or incomplete responses.

For instance, to resolve missing household responses, the Bureau plans to draw data from, among other sources, prior census records and similar nearby households to determine whether a housing unit exists, whether it is occupied, and by how many people. 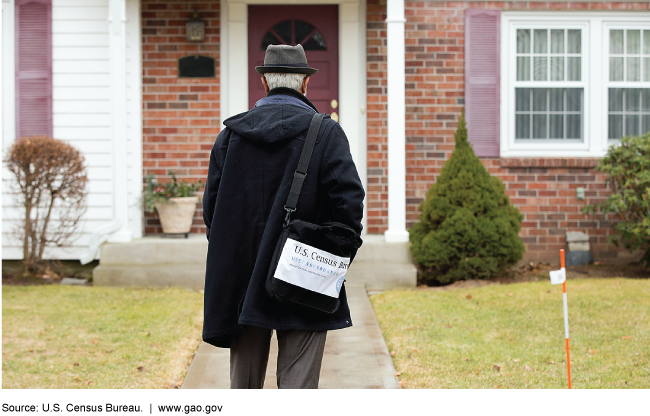 To determine where people should be counted during each decennial census, the Census Bureau (Bureau) has established residence criteria (see figure). For most people, applying these criteria is straightforward. For others who may be more mobile, like members of the military, college students, migrant farm workers, and people living in group quarters such as federal detention centers or in-patient hospice facilities, it can be more complicated. Therefore, for each decennial the Bureau issues guidance describing how the criteria should be applied to certain complex living situations. For the 2020 Census, the Bureau has updated its guidance on where to count people in six complex living situations, such as U.S. employees deployed overseas. The Bureau plans to count people in other living situations in the same manner as it did in 2010. As in 2010, the Bureau will count prisoners at the correctional facility where they are housed, but also plans to make other resources available to states that want to use prisoners' in-state, pre-incarceration addresses for redistricting purposes instead of their prison addresses.

To resolve multiple responses for a single address, for 2020 the Bureau plans to use a longstanding automated routine—its Primary Selection Algorithm—to determine who to count at the address. For 2020, Bureau documents indicate it updated the algorithm after reviewing various response scenarios and data from past censuses and tests.

To resolve missing household responses following data collection, as it did in 2010, the Bureau plans to use for 2020 a technique it refers to as count imputation, which draws data from similar nearby households to determine whether a housing unit exists, whether it is occupied, and, if so, by how many people. However, for 2020, the Bureau will also try to reduce the number of households which otherwise would have required count imputation and help reduce follow-up field work by drawing on relevant data from administrative records of sufficient quality in conjunction with its non-response follow-up field work.

To resolve incomplete and conflicting information within a household response, the Bureau plans to use a technique it refers to as edit and characteristic imputation. This technique involves drawing data from the same household response, prior census and other administrative records or similar nearby households, which the Bureau believes will improve data quality and produce more accurate results.

The decennial census produces data vital to the nation. The data are used for congressional apportionment and redistricting; to allocate billions each year in federal funds; and to provide a social, demographic, and economic profile of the nation to guide policy decisions at all levels of government.

Given census data's importance, it is incumbent upon the Bureau to ensure their quality. If people are counted in the wrong place, some states and localities may unduly lose or gain political power through apportionment and redistricting disproportionate to their actual population. Poor outcomes can also result if some households are over counted due to multiple responses, not counted due to missing responses, or miscounted due to incomplete or conflicting responses.

GAO provided a draft of this report to the Bureau. The Bureau provided technical comments, which were incorporated as appropriate.