For the 2020 Census, the Census Bureau is planning to increase its efforts to include hard-to-count groups, such as minorities, renters, and young children. It is adding more language choices for its materials, hiring more people for outreach in local communities, and hiring earlier.

Still, the Bureau faces challenges such as integrating its outreach and promotion activities across its many different operations, and a tighter labor market that could make hiring people with key skills more difficult.

We recommended the Bureau take steps to ensure changes in its efforts are incorporated across its operations, and collect detailed hiring data. 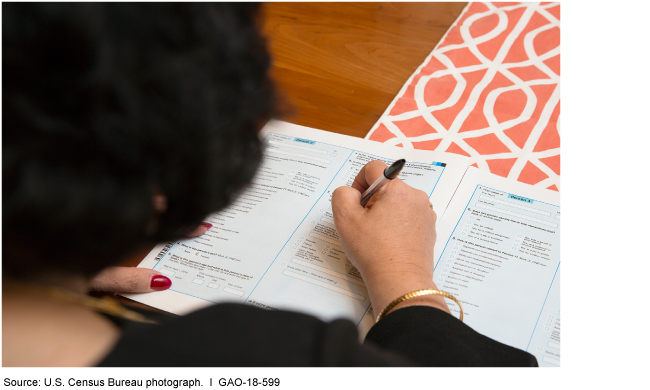 This photo shows a woman filling out a Census form.

The Census Bureau's (Bureau) plans for enumerating groups considered hard-to-count, such as minorities, renters, and young children, in the 2020 Census includes the use of both traditional and enhanced initiatives. For example, the Bureau plans to continue using certain outreach efforts used in 2010, such as a communications campaign with paid advertising, partnerships with local organizations, and targeted outreach to immigrant and faith-based organizations. The Bureau also plans enhancements to its outreach efforts compared to 2010. For example, to help address the undercount of young children, the Bureau revised the census questionnaire and instructions to enumerators to more explicitly include grandchildren in counts. Other planned changes include:

Earlier partnership hiring: The Bureau started hiring a small number of partnership staff in October 2015—2 years earlier than it did for 2010.

While efforts have been made, enumerating hard-to-count persons in 2020 will not be easy. Aside from the inherent difficulties of counting such individuals, the Bureau faces certain management challenges related to its hard-to-count efforts.

Second, the Bureau faces a challenge of a tighter labor market than existed prior to 2010 that could potentially create shortfalls or delays in its hiring of partnership staff who are needed to reach small and hard-to-count communities. In early hiring for 2020, Bureau officials reported smaller than expected applicant pools, declined offers, and turnover. Although it has plans to identify critical skills for 2020 and for tailored recruiting, collecting data on its hiring efforts will also be important. Currently, the Bureau lacks data from its 2010 Census that could have helped inform its partnership-staff hiring efforts for 2020.

A goal for the 2020 Census is to count everyone once, only once, and in the right place. Achieving a complete and accurate census is becoming an increasingly complex task, in part because the nation's population is growing larger, more diverse, and more reluctant to participate. When the census misses a person who should have been included, it results in an undercount. Historically, certain sociodemographic groups have been undercounted in the census, which is particularly problematic given the many uses of census data.

GAO recommends that the Bureau take steps to ensure that forthcoming changes and decisions on its hard-to-count related efforts are integrated with other operational efforts and that it collects data on its 2020 partnership hiring efforts.

The Department of Commerce agreed with GAO's recommendations, and the Bureau provided technical comments that were incorporated, as appropriate.