Every year, we identify and report on federal agencies, programs, and initiatives with fragmented, overlapping, or duplicative goals or activities; and ways to reduce costs or enhance revenue. The government saves money when it takes the actions we've proposed—saving an estimated $136 billion so far by addressing 51% of previously recommended actions.

In this testimony on our 7th annual report, we identified 79 new actions that Congress and executive branch agencies could take to improve government operations.

Fully addressing these and remaining actions from our prior reports could lead to tens of billions of dollars of additional savings. 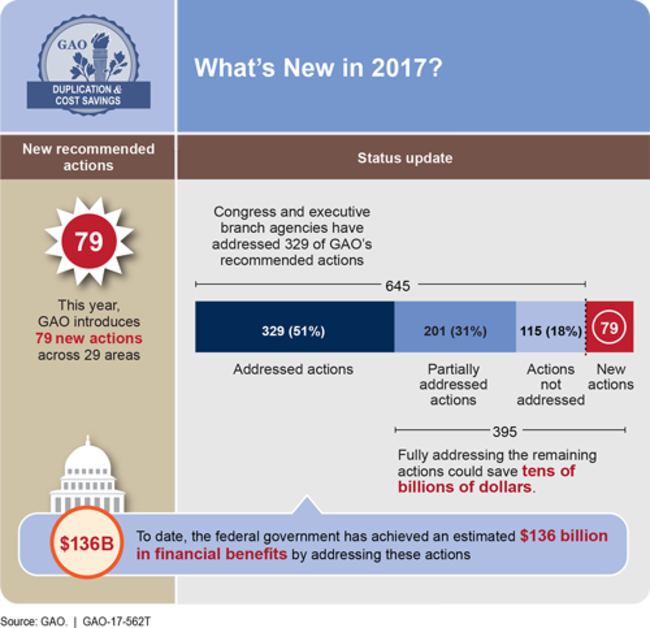 A summary figure highlighting new recommended actions and the status of prior actions.

GAO's 2017 annual report identifies 79 new actions that Congress and executive branch agencies can take to improve the efficiency and effectiveness of government in 29 new areas. Of these, GAO identified 15 areas in which there is evidence of fragmentation, overlap, or duplication. For example, GAO found that the Army and Air Force need to improve the management of their virtual training programs to avoid fragmentation and better acquire and integrate virtual devices into training to potentially save tens of millions of dollars. GAO also identified 14 areas to reduce the cost of government operations or enhance revenues. For example, GAO found that the Department of Energy could potentially save tens of billions of dollars by improving its analysis of options for storing defense and commercial high-level nuclear waste and fuel.

Congress and executive branch agencies have made progress in addressing the 645 actions that GAO identified from 2011 to 2016. Congressional and executive branch efforts to address these actions over the past 6 years have resulted in roughly $136 billion in financial benefits, of which $75 billion has accrued and at least an additional $61 billion in estimated benefits is projected to accrue in future years.

Further steps are needed to fully address the remaining actions GAO identified. GAO estimates that tens of billions of additional dollars would be saved should Congress and executive branch agencies fully address the 395 actions that remain open, including the 79 new actions GAO identified in 2017. While these open actions span the government, a substantial number of them are directed to seven agencies: the Departments of Defense, Health and Human Services, Homeland Security, Veterans Affairs, the Internal Revenue Service, Office of Management and Budget, and the Social Security Administration. For example, the Department of Health and Human Services could potentially save over a billion dollars annually by better aligning its payments to hospitals for the uncompensated care they provide to uninsured and low-income patients.

The federal government faces a long-term, unsustainable fiscal path based on an imbalance between federal revenues and spending. While addressing this structural imbalance will require fiscal policy changes, in the near term opportunities exist in a number of areas to improve this situation, including where federal programs or activities are fragmented, overlapping, or duplicative.

To call attention to these opportunities, Congress included a provision in statute for GAO to identify and report on federal programs, agencies, offices, and initiatives—either within departments or government-wide—that have duplicative goals or activities. GAO also identifies areas that are fragmented or overlapping and additional opportunities to achieve cost savings or enhance revenue collection. GAO's 2017 annual report is its seventh in this series (GAO-17-491SP).

To identify what actions exist to address these issues, GAO reviewed and updated prior work, including recommendations for executive action and matters for congressional consideration.