Did you buy a house before 2007 and, over the next few years, watch its value fall to less than what you owed on your mortgage? Did you lose a house to foreclosure? Weaknesses in the U.S. housing finance system played a major role in the most severe economic downturn since the Great Depression. Today, we describe some of the weaknesses that led to—or were revealed by—the 2007-2009 financial crisis, and their effects on today’s housing finance system.

The financial crisis revealed many problems related to mortgage originations. Leading up to the financial crisis, some lenders created complex mortgage products and loosened the standards used to evaluate a potential borrower’s ability to repay a loan. As a result, some borrowers took out loans with terms they did not fully understand or could not afford.

At the same time, there was an expectation that house prices would continue to rise, and many homeowners borrowed against the equity in their homes. Instead, house sales and prices began falling dramatically in 2006, as shown below, and sales at the end of 2014 were still below prior levels. As a result, many borrowers found themselves “underwater”—owing more than their houses were worth. 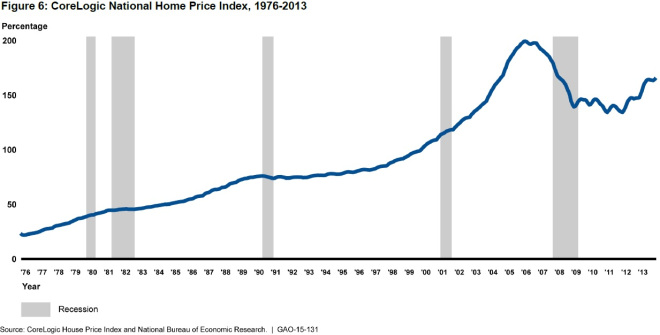 Once the crisis began, many lenders increased qualification requirements for borrowers, making it more difficult to get private mortgages. Federal programs that guarantee loans, such as those through the Federal Housing Administration, grew considerably.

Foreclosures initially skyrocketed during the financial crisis, and although they have declined, foreclosures remain high relative to historic norms, as shown below.

Potential borrowers continue to have limited access to mortgages, and current homeownership rates are lower than they were in 2000. This may be due to

The federal government has attempted to address many of the weaknesses exposed by the housing crisis. Efforts have included

It is still too early to tell what the impact of some of these federal efforts will be. More broadly, the appropriate level of federal support for housing finance is still in question. Check out our full report on weaknesses in the housing finance system for a framework to assess the impact of potential changes.