Scientists are developing advances in battery technologies to meet increasing energy storage needs for the electric power grid and electric vehicle use. 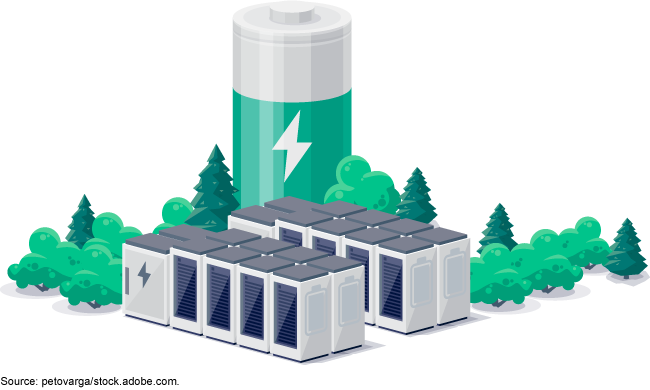 Batteries are critical for powering many of our everyday technologies. Increased demand in areas such as transportation and electric grid storage will require longer-lasting batteries with more capacity. Scientific advances in batteries could meet the demand for more energy storage while also ensuring these next-generation batteries are safe, cost-effective, and sustainable. However, challenges remain.

A battery is an energy storage device that consists of a chemical solution called an electrolyte and a separator that serves as a barrier between two terminals—an anode and a cathode. During use, the electrolyte allows the flow of charged particles, such as lithium ions, from the anode to the cathode. This produces an electric current that flows out of the battery to a device through an external circuit. Charging the battery reverses this process. Different applications, such as electric vehicles or electric grid storage, require different battery properties—such as size, weight, portability, or duration of use—each of which comes with trade-offs.

Figure 1. Example of How Rechargeable Lithium-Ion Batteries Work During Use

Most current battery research focuses on lithium-based systems, which can store a lot of energy in a small volume and undergo many charging cycles. According to the American Chemical Society, lithium-ion batteries will make up 70 percent of the rechargeable battery market by 2025. The lithium supply would need to increase to meet this demand, prompting efforts to develop advanced battery technologies that use more earth-abundant materials and reduce reliance on foreign-produced materials.

How does it work?

Scientists are exploring how to replace critical elements in various components of lithium-ion batteries to improve their performance and safety while using more sustainable, widely-available, and cost-effective materials. For example, the standard material used for the anode of lithium-ion batteries is graphite—the same flaky carbon material used in pencils. However, silicon is a cheap and more readily available material that is safer and can potentially store 10 times as much lithium by weight.

Alternative cathode materials are also being tested for lithium-ion batteries. For example, different metal oxides are typically used in the cathode to interact with the lithium and give the battery different traits. Alternatively, lithium-sulfur batteries contain a sulfur-based cathode that reacts with lithium ions to form lithium sulfide, which could allow cells to store 5 times as much energy as a conventional lithium-ion battery. Sulfur is an abundant element that can be mined in the U.S. This makes it a more sustainable alternative to other commonly used metals in lithium-ion battery cathodes, such as cobalt, which is costly and may come from overseas mines with controversial labor or mining practices.

Another advancement replaces the typically liquid electrolyte—which can be flammable and can catch fire when overheated—with safer, more stable materials. For example, using a solid electrolyte such as a ceramic or glassy material may prevent the build-up of lithium salt crystals that can short the battery’s circuit and cause fires. These solid-state batteries have the potential to store twice the energy of conventional lithium-ion batteries, increasing how long the battery can work before it needs to be recharged.

Lithium-ion batteries are generally limited to short duration use. Rechargeable metal-air batteries and flow batteries may allow for longer storage duration, which could provide advantages in storing intermittent energy produced from renewable sources for use when needed. Metal-air batteries use a metal anode paired with a porous cathode to allow oxygen flow from the surrounding air. Because one terminal is porous, these batteries are lighter than conventional batteries. Researchers have investigated a variety of metals—such as aluminum, lithium, sodium, tin, and zinc—for potential use. Each comes with different advantages and disadvantages. For example, the aluminum-air battery is lightweight, recyclable, made of common materials, and cheap, but is difficult to recharge due to a tendency to corrode.

Unlike standard rechargeable batteries, flow batteries store liquid electrolytes in external tanks. Because there is no size limit for external tanks, the storage capacity of the flow battery can be scaled up as needed. This makes them ideal for storing large amounts of energy for the grid but less useful in portable applications like electric vehicles.

Figure 2. Example of How Flow Batteries Work for a Grid Application

One of the most advanced flow batteries uses vanadium ions in the electrolyte. Vanadium is costly and scarce; however, vanadium's ions are stable and can be cycled through the battery over and over without undergoing unwanted side reactions, theoretically providing unlimited storage. However, vanadium batteries cannot store a lot of energy in a small volume, thus requiring large external tanks to hold enough power to be useful. Researchers are investigating a variety of chemistries for flow batteries—including zinc-bromine, which uses low-cost, easily accessible materials.

How mature is it?

Advances in lithium-ion batteries are in various stages of research, but none are currently in commercial use for electric vehicles or grid storage. Batteries with sulfur-based cathodes, silicon-based anodes, and solid electrolytes are all in the pilot phase for transportation applications, with the latter two being piloted for use in electric vehicles. Batteries with silicon-based anodes are only commercially available in small electronics.

Non-rechargeable metal-air batteries can be found in devices such as hearing aids; however, currently no rechargeable metal-air battery chemistry has reached large-scale commercialization. Much of flow battery chemistry research has been conducted on a small scale in labs; however, flow batteries are used commercially for several grid and storage applications—including in the U.S., Japan, and Australia.