A network of over 1,600 offshore facilities produce a significant portion of U.S. domestic oil and gas. These facilities, which rely on technology to remotely monitor and control equipment, face a growing risk of cyberattacks.

A cyberattack on these facilities could cause physical, environmental, and economic harm. And disruptions to oil and gas production and transmission could affect supplies and markets.

The Department of the Interior—which is responsible for overseeing the infrastructure—has taken few steps to address cybersecurity risks. We recommended that Interior immediately develop and implement a cybersecurity strategy.

Supply boats respond to a fire during the catastrophic 2010 Deepwater Horizon disaster. 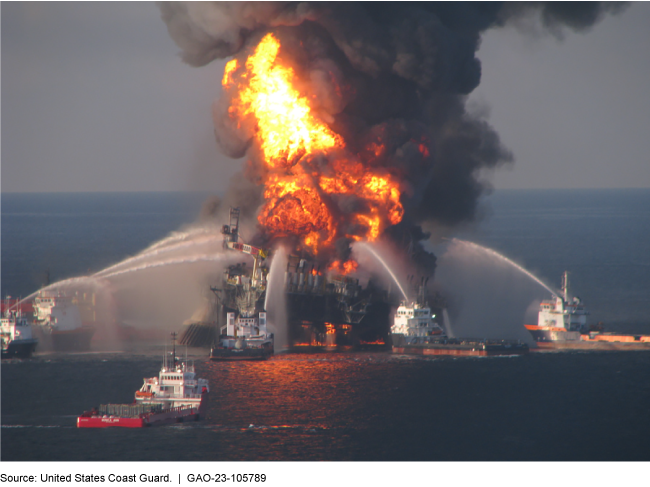 Threat actors. State actors, cybercriminals, and others could potentially conduct cyberattacks against offshore oil and gas infrastructure. The federal government has identified the oil and gas sector as a target of malicious state actors.

Potential impacts. A successful cyberattack on offshore oil and gas infrastructure could cause physical, environmental, and economic harm, according federal officials. For example, officials said that the effects of a cyberattack could resemble those that occurred in the 2010 Deepwater Horizon disaster. Disruptions to oil and gas production or transmission could also affect energy supplies and markets.

An Oil Facility in the Gulf of Mexico 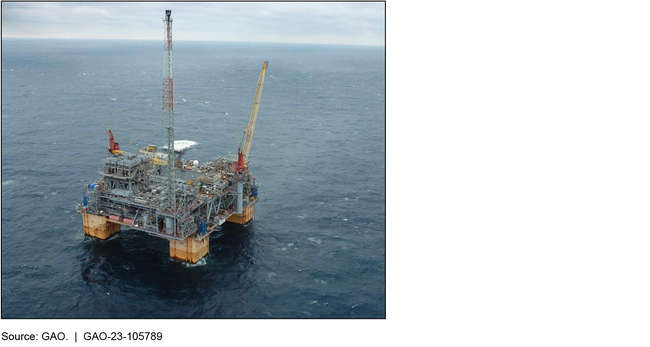 The Department of the Interior's Bureau of Safety and Environmental Enforcement (BSEE) has long recognized the need to address cybersecurity risks but has taken few actions to do so. In 2015 and 2020 BSEE initiated efforts to address cybersecurity risks, but neither resulted in substantial action. Earlier this year, BSEE again started another such initiative and hired a cybersecurity specialist to lead it. However, bureau officials said the initiative will be paused until the specialist is adequately versed in the relevant issues. Absent the immediate development and implementation of an appropriate strategy, offshore oil and gas infrastructure will continue to remain at significant risk. Such a strategy would call for, among other things, an assessment of cybersecurity risks and mitigating actions; and the identification of objectives, roles, responsibilities, resources, and performance measures.

GAO interviewed officials from agencies with offshore and cybersecurity responsibilities. It also obtained the perspectives of nonfederal stakeholders representing the offshore oil and gas industry.

GAO is making one recommendation: BSEE should immediately develop and implement a strategy to address offshore infrastructure risks. Such a strategy should include an assessment and mitigation of risks; and identify objectives, roles, responsibilities, resources, and performance measures, among other things. In an email, we were informed that Interior generally concurred with our findings and recommendation.