U.S. wildfires have grown more severe in recent years. The Department of Agriculture's Forest Service and 4 agencies within the Department of the Interior rely on about 18,700 employees to fight fires.

But recruiting and retaining federal wildland firefighters has been difficult due to factors like low pay, poor work-life balance, limited workforce diversity, and more. To help, the Forest Service has increased the size of some firefighting crews to make it easier for crew members to take time off to rest. Agencies are also working to increase pay and improve workforce diversity, mental health services, and hiring practices. 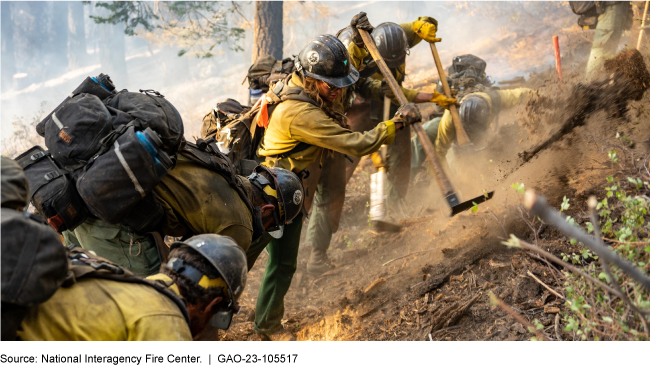 The federal wildland firefighting workforce is composed of approximately 18,700 firefighters (including fire management and support staff) from the Department of Agriculture's Forest Service and from four agencies in the Department of the Interior. The Interior agencies are the Bureau of Indian Affairs, Bureau of Land Management, Fish and Wildlife Service, and National Park Service. GAO identified seven barriers to recruitment and retention of federal wildland firefighters through analysis of interviews with agency officials and 16 nonfederal stakeholders and a review of documents (see fig.).

Low pay was the most commonly cited barrier to recruiting and retaining federal wildland firefighters. Officials and all 16 stakeholders stated that the pay, which starts at $15 per hour for entry-level positions, is low. Officials and eight stakeholders also noted that the pay does not reflect the risk or physical demands of the work. Moreover, officials and stakeholders said that in some cases, firefighters can earn more at nonfederal firefighting entities or for less dangerous work in other fields, such as food service. The Forest Service and Interior agencies have taken steps to help address this barrier. For example, in 2022, the agencies worked with the Office of Personnel Management (OPM) to address a provision of the Infrastructure Investment and Jobs Act calling for the agencies to increase firefighter salaries by the lesser of $20,000 or 50 percent of base salary in locations where it is difficult to recruit or retain wildland firefighters. In June 2022, the agencies announced that the salary increase would apply to wildland firefighters in all geographic locations, as their analysis indicated that recruitment and retention challenges existed in all locations. The act authorized funding for the wildland firefighter provisions, including those related to salary increases, for fiscal years 2022 through 2026, and appropriated some funding toward those provisions.

The Forest Service and Interior are taking steps to address other barriers as well. For example, to help improve work-life balance for firefighters, the Forest Service increased the size of some firefighting crews, a change intended to allow crew members to more easily take time off for rest or personal reasons, according to Forest Service officials. In addition, in fiscal year 2021, 84 percent of federal firefighters identified as men and 72 percent identified as White. To increase diversity, the agencies have recruited women and underrepresented racial and ethnic groups, including through a wildland firefighter apprentice program. The agencies are also taking steps to improve mental health services and hiring practices.

In recent decades, the size and severity of wildfires has increased across much of the United States, as has the length of wildfire seasons. For example, the total acres burned across the United States has doubled over the past 20 years, breaking records in many states. These increases are straining the federal wildland firefighting workforce.

To identify and describe these barriers, GAO reviewed laws, regulations, and program guidance and other agency documents. GAO also interviewed senior officials from the Forest Service and Interior, including both wildland fire and human capital managers, and from OPM.

To get a broader perspective on barriers, GAO interviewed a nongeneralizable sample of 16 nonfederal stakeholders, such as nongovernmental organizations involved in firefighting issues. GAO identified stakeholders through a review of documents and interviews with officials, and GAO asked those interviewed to suggest others. GAO selected stakeholders found to be most engaged with issues associated with recruiting and retaining federal wildland firefighters. GAO also conducted a literature search to corroborate information on barriers.