Legislation enacted in 2008 increased federal reimbursement of state assistance payments to adoptive families, saving states more than $800 million from FY 2015-19. But, states must reinvest all of these "adoption savings" back into child welfare services.

We found that states' rates of reinvestment varied widely. Some states spent little or none of their savings—in part due to issues like difficulty understanding what services they were allowed to fund.

We recommended that the Department of Health and Human Services provide more guidance to help states spend this money faster to help children in the child welfare system. 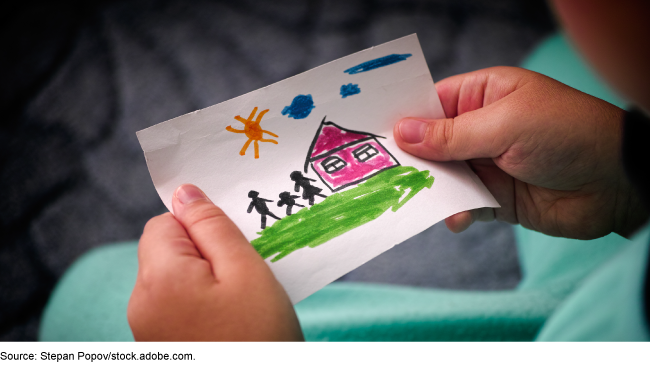 From fiscal years 2015 through 2019, states collectively reinvested $516 million of the $843 million they accrued in “adoption savings” (see figure). Adoption savings are state funds saved due to the increasing number of children eligible for federal adoption assistance payments. States spent $224 million of these savings on post-adoption or post-guardianship (“post-permanency”) services, $67 million on services for youth at risk of entering foster care (“preventative services”), and $225 million on other child welfare services. States' individual spending varied widely. For example, 10 states spent all of their adoption savings, but 23 spent less than half, and nine of those spent none.

The Children's Bureau—part of the Department of Health and Human Services' (HHS) Administration for Children and Families (ACF)—monitors states' adoption savings reinvestment, but its oversight is hindered by a lack of detailed data. Further, there is no statutory deadline for states to spend their savings, and Children's Bureau officials said states can delay their spending indefinitely. Also, the state data the Children's Bureau collects annually does not always allow it to definitively determine states' compliance with the requirement to spend at least 30 percent of their annual adoption savings on post-permanency and preventative services, including at least 20 percent on post-permanency services (the 20 and 30 percent requirements). If states do not reinvest their adoption savings or meet the 20 and 30 percent requirements, children will not benefit from the additional spending as intended by the law.

Nearly half (23 of 52) of the states reported in GAO's survey at least one significant challenge to reinvesting their adoption savings, most often citing early spending difficulties such as needing time to understand the new requirements and competing state budget priorities. Most of the 28 states that received technical assistance from the Children's Bureau in fiscal year 2019 reported it was helpful, but 22 states wanted more assistance. Of those, 13 wanted more guidance on allowable adoption savings expenditures and/or other states' best practices and strategies for spending their savings. Further, 10 of these states had not yet spent 30 percent of their cumulative savings on required services. Without additional guidance or technical assistance, states may have difficulty meeting the 20 and 30 percent requirements or reinvesting their savings overall.

The Fostering Connections to Success and Increasing Adoptions Act of 2008 expanded eligibility for federal adoption assistance and required states to reinvest any resulting adoption savings in their child welfare systems. The Preventing Sex Trafficking and Strengthening Families Act required states to spend a minimum percentage of these savings on specific types of services starting in fiscal year 2015. The Bipartisan Budget Act of 2018 included a provision for GAO to study states' adoption savings reinvestment.

This report examines (1) the extent to which states are reinvesting their adoption savings, (2) how the Children's Bureau monitors these reinvestments, and (3) any challenges states face in reinvesting savings and what guidance the Children's Bureau provides. GAO analyzed state adoption savings and spending data for fiscal years 2015 through 2019, all available years of data at the time of this review. GAO surveyed 53 state child welfare agencies and 52 completed the survey. GAO also interviewed child welfare officials in eight states selected to provide variation in several areas, including the percent of adoption savings they had reinvested.

GAO recommends ACF 1) collect additional state data to improve its oversight, and 2) provide guidance or technical assistance to states on services that count toward the 20 and 30 percent requirements and on timely reinvestment of their adoption savings. HHS disagreed with the first recommendation and agreed with the second. GAO maintains that additional data would improve ACF oversight.