U.S. Customs and Border Protection processes millions of imported shipments. When the COVID-19 pandemic began, imports briefly declined but then rose sharply, partly due to more online shopping and orders for supplies like masks.

The pandemic hasn't noticeably affected the time it takes CBP to process and release imports.

Imported Goods Await Inspection by U.S. Customs and Border Protection at a Port of Entry 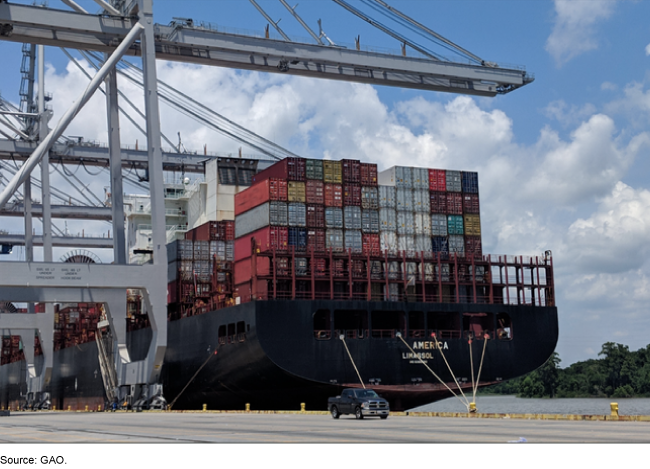 The COVID-19 pandemic caused a shift in U.S. international trade trends. In particular, an initial decline in imports occurred at the pandemic's onset in March 2020, followed by a steep resurgence several months later. According to CBP officials, this resurgence resulted in part from increased e-commerce shipments, as more consumers shopped from home, and increased demand for products such as masks. These increases contributed to a rise in the cost of shipping goods to the U.S., as charges for shipping containers rose. Importers responded to some of these shifts by transitioning from ocean vessel to air freight because of air freight's faster shipping times and lower rates.

U.S. Customs and Border Protection (CBP) took a number of steps to respond to challenges stemming from the pandemic. For example, to minimize staff exposure to COVID-19, the agency implemented social distancing, staggered shifts, allowed telework, and required the use of personal protective equipment (PPE), according to agency officials. To maintain continuity of operations, CBP used workplace flexibilities to mitigate staff absences and adapted inspection procedures to account for increased telework. CBP also took steps, including reducing overtime and nonessential travel, to help address steep declines in revenue from user fees, such as fees for inspections of commercial vessels and trucks at U.S. ports. In addition, the agency created the COVID-19 Cargo Resolution Team to facilitate imports and support the U.S. supply of PPE and other COVID-19-related products.

The pandemic has not noticeably affected the timeliness of CBP's processing and release of import shipments, but it has slowed other operations at U.S. ports. In the months before and after the pandemic's onset, CBP processed and released about 97 percent of shipments within 24 hours after they arrived at U.S. ports or after the importers filed required entry documents. The agency uses these documents to calculate taxes, duties, and fees for the imported goods. However, since the pandemic's onset, more importers have filed entry documents on or after, rather than before, their shipments' arrival. According to CBP officials, this has affected certain non-CBP operations. For example, the officials said that because of increased congestion at U.S. ports—with many ships waiting weeks to offload—importers often file the documents and pay any duties and fees only after their goods have been offloaded. Since the ports use the entry documents to schedule non-CBP operations such as offloading and moving of cargo, the later filings of these documents have sometimes slowed such operations, according to CBP officials.

CBP monitors, regulates, and facilitates the movement of commodities through U.S. ports. The agency staffs 328 U.S. ports, where goods are imported and exported by truck, rail, plane, and ocean vessel. In fiscal year 2021, CBP processed 36.9 million import shipments and collected approximately $93.8 billion in duties, taxes, and other fees, including user fees for inspections at U.S. ports.

The CARES Act includes a provision for GAO to conduct monitoring and oversight of the federal response to the pandemic. For this report, GAO (1) analyzed general trends in U.S. international trade since the pandemic's onset, (2) identified steps CBP took to respond to challenges stemming from the pandemic, and (3) determined the extent to which the pandemic has affected CBP's processing and release of import shipments and other operations at U.S. ports.

For more information, contact Kimberly Gianopoulos at (202) 512-8612 or gianopoulosk@gao.gov.