The Department of Housing and Urban Development takes a "point-in-time" count to gauge how many people are experiencing homelessness on a single night. HUD relies on local communities to provide the count.

During the pandemic, HUD supplemented in-person enumerations by allowing local communities to use data collected by public and nonprofit agencies on people using their services—an approach that likely improved accuracy of point-in-time counts.

We recommended that HUD provide communities more information about how best to use such data to improve point-in-time counts moving forward. 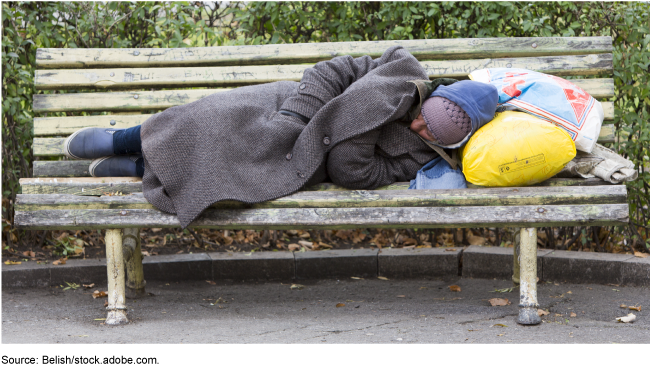 The Point-in-Time (PIT) count is a nationwide count of people experiencing homelessness on a single night, conducted by Continuums of Care (CoC)—local planning bodies that coordinate homelessness services. The Department of Housing and Urban Development (HUD) allows CoCs to use different methods to estimate homeless populations—including a census (complete count), sampling, or a combination of these. For counting unsheltered individuals (those on the street or in other uninhabitable places), HUD requires CoCs to use in-person methods—for example, by having enumerators visually locate and attempt to ask questions of these individuals on the night of the count. HUD permits CoCs to also use administrative data—that is, records collected by public and nonprofit agencies on people who use their services. However, HUD does not provide CoCs with examples of how to extract and use administrative data for the unsheltered count. By doing so, HUD could help improve the quality and consistency of CoCs' estimates and position CoCs to provide better estimates, particularly if in-person counts are again disrupted, as they were in 2021, during the COVID-19 pandemic.

The U.S. PIT count is similar to Canada's and England's approaches in that they are nationally administered and localities can choose among various approved methods to conduct in-person local counts. The Netherlands and Australia use more centralized methods and statistical analyses to develop estimates. For example, Australia produces an estimate using data from the general census of the population.

Little comprehensive data exist on PIT count costs, but a GAO survey of 41 CoCs provided information on funding sources and key resources required from their most recent unsheltered PIT count prior to 2021:

Examples of Homeless Encampments in Oakland, California, in 2021

HUD's PIT count is a key tool for estimating the size of the U.S. homeless population. However, developing an accurate understanding of the extent of homelessness is challenging due to the hidden nature of the population. Further, some members of Congress and others have raised questions about the reliability of HUD's estimates.

GAO was asked to review the PIT count and alternative methods for estimating the size of homeless populations. This report (1) examines communities' approaches for counting people experiencing homelessness and HUD's guidance for using these approaches, (2) describes approaches used by selected foreign countries to estimate their homeless populations, and (3) describes what is known about funding sources and resources expended by selected communities in conducing the PIT count.

GAO conducted a literature review to identify methods to estimate homelessness and selected four countries for case study based on a literature review and recommendations from researchers. GAO also surveyed a nongeneralizable sample of 60 CoCs and received responses from 41 of them about PIT count costs and funding sources, reviewed agency guidance and documents, and interviewed U.S. and foreign government officials.

GAO recommends that HUD provide CoCs additional information about how they can use administrative data to improve the accuracy of their unsheltered PIT count. HUD agreed with our recommendation.

The Challenges in Counting and Serving Homeless Populations

The days are getting colder as Thanksgiving approaches. Many of us may feel fortunate to share time...
Chuck Young
Managing Director
youngc1@gao.gov
(202) 512-4800
Housing
HomelessnessCommunitiesHousingCensuspandemicsUrban developmentGrant programsGeographyCensus takersPublic officials