This report updates our oversight of some aspects of the federal response to the COVID-19 pandemic. Findings include:

Public health. Between January 1 and June 30, about 125,000 more deaths occurred from all causes than would normally be expected—an indicator of the pandemic's effect on health care outcomes.

Actions. Agencies have taken action on some of our June 2020 recommendations. For example, Treasury officials stated that nearly 70 percent of $1.6 billion in economic impact payments sent to the deceased has been recovered. 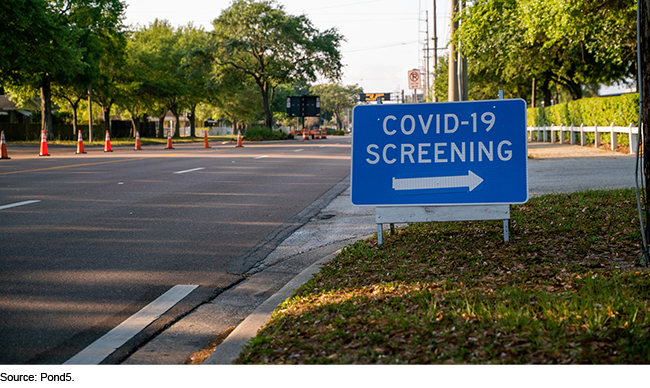 As of August 20, 2020, the U.S. had over 5.5 million cumulative reported cases of COVID-19, and 158,000 reported deaths, according to federal agencies. The country also continues to experience serious economic repercussions and turmoil. Four relief laws, including the CARES Act, were enacted between March and July 2020 to provide appropriations for the response to COVID-19.

The CARES Act includes a provision for GAO to report bimonthly on its ongoing monitoring and oversight efforts related to COVID-19. This second report examines federal spending on the COVID-19 response; indicators for monitoring public health and the economy; and the status of matters for congressional consideration and recommendations from GAO’s June 2020 report (GAO-20-625).

GAO reviewed data through June 30, 2020 (the latest available) from USAspending.gov, a government website with data from government agencies. GAO also obtained, directly from the agencies, spending data, as of July 31, 2020, for the six largest spending areas, to the extent available.

To update the status of matters for congressional consideration and recommendations, GAO reviewed agency and congressional actions.

In response to the national public health and economic threats caused by COVID-19, four relief laws making appropriations of about $2.6 trillion had been enacted as of July 31, 2020. Overall, federal obligations and expenditures government-wide of these COVID-19 relief funds totaled $1.5 trillion and $1.3 trillion, respectively, as of June 30, 2020. GAO also obtained preliminary data for six major spending areas as of July 31, 2020 (see table).

Source: GAO analysis of data from the Department of the Treasury, USAspending.gov, and applicable agencies. | GAO-20-708

The CARES Act included a provision for GAO to assess the impact of the federal response on public health and the economy. The following are examples of health care and economic indicators that GAO is monitoring.

Health care. GAO’s indicators are intended to assess the nation’s immediate response to COVID-19 as it first took hold, gauge its recovery from the effects of the pandemic over the longer term, and determine the nation’s level of preparedness for future pandemics, involving subsequent waves of either COVID-19 or other infectious diseases.

For example, to assess the sufficiency of testing—a potential indicator of the system’s response and recovery—GAO suggests monitoring the proportion of tests in a given population that are positive for infection. A higher positivity rate can indicate that testing is not sufficiently widespread to find all cases. That is higher positivity rates can indicate that testing has focused on those most likely to be infected and seeking testing because they have symptoms, and may not be detecting COVID-19 cases among individuals with no symptoms.

GAO also suggests monitoring mortality from all causes compared to historical norms as an indicator of the pandemic’s broad effect on health care outcomes. Mortality rates have tended to be consistent from year to year. This allows an estimation of how much mortality rose with the onset of the pandemic, and provides a baseline by which to judge a return to pre-COVID levels. According to Centers for Disease Control and Prevention data, about 125,000 more people died from all causes January 1–June 13 than would normally be expected (see figure).

Note: The figure shows the number of deaths from all causes in a given week that exceeded the upper bound threshold of expected deaths calculated by CDC on the basis of variation in mortality experienced in prior years. Changes in the observed numbers of deaths in recent weeks should be interpreted cautiously as this figure relies on provisional data that are generally less complete in recent weeks. Data were accessed on July 16, 2020.

Economy. GAO updated information on a number of indicators to facilitate ongoing and consistent monitoring of areas of the economy supported by the federal pandemic response, in particular the COVID-19 relief laws. These indicators suggest that economic conditions—including for workers, small businesses, and corporations—have improved modestly in recent months but remain much weaker than prior to the pandemic.

In June and July initial regular unemployment insurance (UI) claims filed weekly averaged roughly 1.4 million (see figure), which was six and a half times higher than average weekly claims in 2019, but claims have decreased substantially since mid-March, falling to 971,000 in the week ending August 8, 2020. Increasing infections in some states and orders to once again close or limit certain businesses are likely to pose additional challenges for potentially fragile economic improvements, especially in affected sectors, such as the leisure and hospitality sector.

Note: See figure 5 in the report.

As GAO reported in June, consistent with the urgency of responding to serious and widespread health issues and economic disruptions, federal agencies gave priority to moving swiftly where possible to distribute funds and implement new programs designed to help small businesses and the newly unemployed, for example. However, such urgency required certain tradeoffs in achieving transparency and accountability goals. To make mid-course corrections, GAO made three recommendations to federal agencies:

GAO incorporated technical comments received the Departments of Labor, Commerce, Health and Human Services, Transportation, and the Treasury; the Federal Reserve; Office of Management and Budget; and Internal Revenue Service. The Small Business Administration commented that GAO did not include information on actions taken and controls related to its loan forgiveness program or its plans for loan reviews. GAO plans to provide more information on these topics in its next CARES Act report.