We found that many Indian students have limited public school options. Most school districts with at least 25% Indian students only offered traditional public schools. Many of these districts are in rural areas, where there may not be enough total students to justify additional schools. Districts in large urban areas often had more choices. 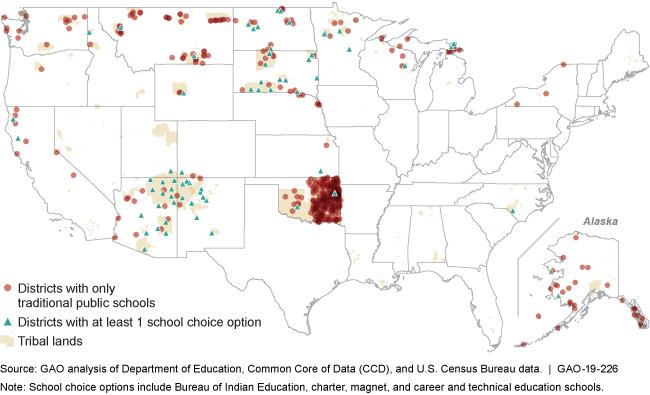 Map of the U.S. showing that most school districts offered only traditional public schools.

Few areas provide American Indian and Alaska Native students (Indian students) school choice options other than traditional public schools. According to GAO's analysis of 2015-16 Department of Education (Education) data, most of the school districts with Indian student enrollment of at least 25 percent had only traditional public schools (378 of 451 districts, or 84 percent). The remaining 73 districts had at least one choice, such as a Bureau of Indian Education, charter, magnet, or career and technical education school (see figure). Most of these 451 districts were in rural areas near tribal lands. Rural districts may offer few school choice options because, for example, they do not have enough students to justify additional schools or they may face difficulties recruiting and retaining teachers, among other challenges. 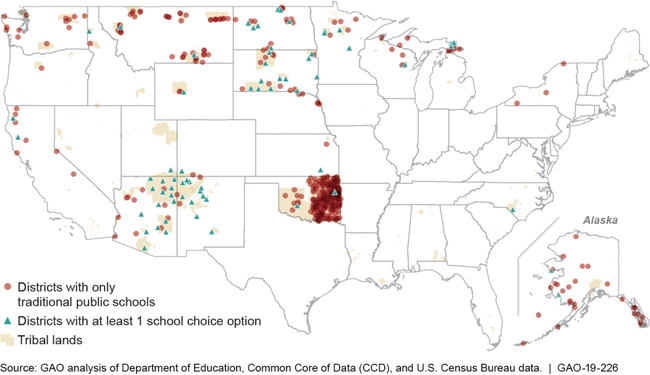 Some of the 100 school districts with the largest number of Indian students were located in large urban areas, such as New York City, and the majority (62) offered at least one option other than a traditional public school, according to GAO's analysis. The most common option was a charter school. However, because Indian students often account for a small percentage of all students in these districts, Indian education experts GAO interviewed said that the schools are less likely to have curricula that reflect Indian students' cultural identity or provide instruction on Native languages—things that tribes and experts consider crucial to strengthening, rebuilding, and sustaining Indian cultures and communities. Also, even when Indian students had more options, no consistent enrollment patterns were evident. Whether Indian students enrolled in different types of schools could be a function, in part, of differences in state school choice laws and the extent to which these schools offered curricula that reflect Indian languages, cultures, or histories, according to Indian education experts.

Education refers to school choice as the opportunity for students and their families to create high-quality, personalized paths for learning that best meet the students' needs. For Indian students, school choice can be a means of accessing instructional programs that reflect and preserve their languages, cultures, and histories. For many years, studies have shown that Indian students have struggled academically and the nation's K-12 schools have not consistently provided Indian students with high-quality and culturally-relevant educational opportunities.

GAO is not making recommendations in this report.

Back to School with GAO