The military relies on its Global Positioning System for many operations, but threats like cyber threats and jamming are constant risks. To maintain GPS capabilities, DOD is modernizing the system and also developing alternatives.

But we found that 4 of 5 alternative systems in development didn't have complete business cases—which justify the project and evaluate associated benefits, costs, and risks. So DOD leaders didn't have enough information to support crucial decisions at the start. We also found that DOD's oversight council for GPS hasn't set goals for measuring progress on the alternatives.

We recommended that DOD address these issues.

The GPS system provides positioning, navigation, and timing data to the military 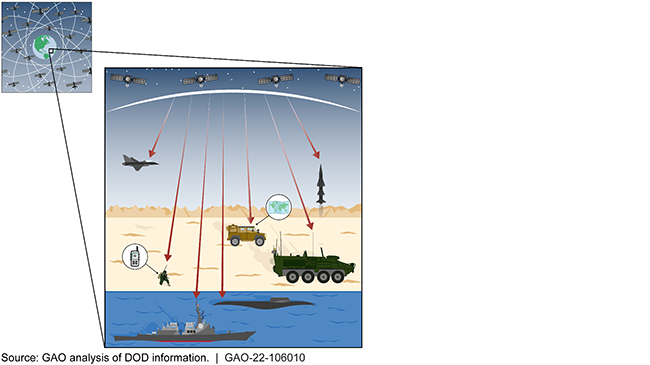 The U.S. military relies on its Global Positioning System (GPS) to provide position, navigation, and timing data crucial to its operations. Access to these data, collectively known as PNT, and GPS face multiple threats, including: (1) anti-satellite weapons, (2) jamming, (3) spoofing, and (4) cyber. Given GPS's vulnerabilities, the Department of Defense (DOD) is modernizing GPS by adding a stronger encrypted signal, known as M-code, and using technologies like anti-jam antennas. Even with upgrades, vulnerabilities will remain.

In addition to the above efforts, DOD is at the advanced prototyping stage for several alternative PNT efforts, including improved clocks, and satellite systems.

DOD's overall PNT portfolio is managed by the PNT Oversight Council, a statutorily established senior-level body. However, the Council has largely prioritized modernizing the existing GPS system over alternative PNT efforts during recent meetings and has no strategic objectives or metrics to measure progress on the alternative efforts. Defined objectives and metrics would help the Council better measure overall performance and mitigate any potential gaps in PNT capabilities as the military transitions to using M-code.

DOD primarily relies on GPS for accurate PNT data, which is essential to effective military operations. However, multiple threats can render GPS data unavailable or inaccurate. DOD recognizes the threats to GPS and is taking steps to address them by developing more robust GPS capabilities and alternative PNT technologies. GAO was asked to review DOD's acquisition of alternative PNT technologies.

This report discusses (1) the threats facing GPS; (2) DOD's alternative PNT efforts and their business cases; and (3) DOD's oversight of its PNT portfolio. This is a public version of a sensitive report that GAO issued in April 2022. Information that DOD deemed to be sensitive has been omitted.

GAO recommends that the Secretary of the Navy ensure the Navy's alternative PNT efforts have complete business case elements, such as an acquisition strategy. GAO also recommends that the PNT Oversight Council establish strategic objectives and metrics to measure the progress of its PNT portfolio overall. DOD concurred with one recommendation and partially concurred with the other. GAO maintains both recommendations are valid.