U.S. Customs and Border Protection officers and agents follow a detailed process for seizing illicit drugs, including collecting and recording data on drug type and how it was concealed. Although CBP data systems have various fields for recording such data, CBP hasn't assessed if the drug type categories in its systems adequately reflect drug smuggling scenarios that officers and agents confront.

Also, officers and agents are trained on drug seizures at their respective academies and post-academy programs, but CBP hasn't evaluated the post-academy training.

We recommended that CBP address these issues to better inform drug interdiction efforts.

U.S. Customs and Border Protection seizure of drugs found in a watermelon shipment 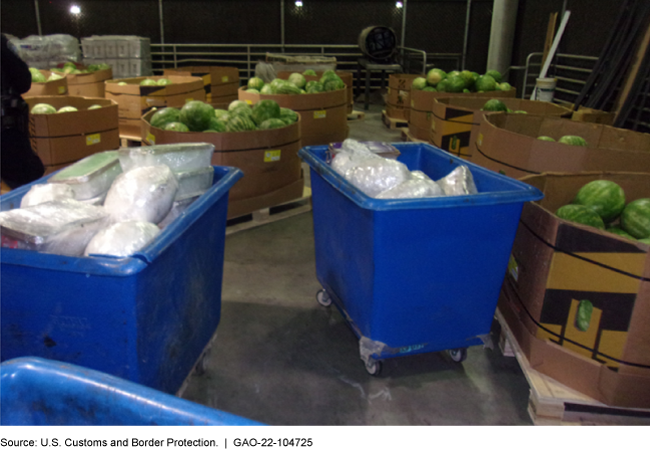 U.S. Customs and Border Protection (CBP) officers and agents follow a multi-step process when seizing drugs. This process includes collecting seizure data such as the drug type and concealment method in CBP data systems. CBP officials have several mechanisms to perform quality assurance efforts on drug seizure records. For example, they conduct supervisory reviews of the records for accuracy before they are finalized. CBP intelligence entities—such as field targeting and intelligence units—review seizure data in CBP data systems on a daily basis to inform their drug interdiction efforts, target drug smugglers, and monitor drug seizure trends. GAO found that the number of CBP drug seizures increased from about 65,000 in fiscal year 2016 to 99,000 in fiscal year 2021.

While CBP has various fields in its data systems for recording, analyzing, and using data on drug seizures, it has not assessed its categories for drug type to determine if they adequately reflect the drug smuggling scenarios encountered by CBP officers and agents and if they are useful for targeting and intelligence. For example, GAO found that 23 percent of total drug seizures from fiscal years 2016 through 2021 were classified in a catchall drug type category— Other drugs, prescriptions, and chemicals. CBP intelligence officials GAO spoke with who use and analyze drug seizure data stated that they have some concerns with the drug type categories available—particularly this catchall category—because the lack of specificity requires additional research, such as text searches. Assessing the drug type categories available in its data systems could strengthen the quality of CBP's drug seizure data and reduce the work for CBP intelligence officials who analyze the data.

While CBP officers and agents are trained on the process for recording drug seizures during their academy and post-academy programs, CBP has not evaluated its post-academy drug seizure training. Specifically, the Office of Field Operations (OFO) and U.S. Border Patrol have not evaluated them since they implemented them in 2011 and 2006, respectively. Finalizing and implementing a plan to regularly evaluate their post-academy drug seizure training would provide OFO and Border Patrol with the data and information needed to determine if the training is helping achieve CBP's goals related to drug seizures.

Within the Department of Homeland Security (DHS), CBP is responsible for securing the nation's borders and preventing the illegal flow of people, contraband, and drugs from entering the U.S. CBP has an important role in national efforts to prevent the use of illicit drugs and the misuse of prescription drugs. Specifically, CBP is responsible for interdicting drugs and working with other federal agencies to prevent their importation.

GAO analyzed CBP drug seizure data from fiscal years 2016 through 2021, which were the most recent data available; and reviewed related policies and procedures. GAO also interviewed officials at CBP headquarters and 11 selected field locations, including officers and agents at those locations. GAO selected these locations to include varying levels of drug seizures and variety in geographic location, among other factors.

GAO is making three recommendations, that CBP assess the drug type categories available in its data systems, and that OFO and Border Patrol each finalize and implement a plan to regularly evaluate their post-academy drug seizure training. DHS concurred with the recommendations.