In 2020, the federal government and the state of South Dakota sponsored Fourth of July celebrations and related events in Washington, D.C., and at the Mount Rushmore National Memorial in South Dakota—all during the COVID-19 pandemic. Cost of the celebrations are estimated to be more than $14 million.

The 2020 events included some modifications and protective measures in place to ensure the health and safety of the public, federal employees, and other essential workers. At several events, federal and state agencies made protective equipment, such as masks and hand sanitizer, available to the public. 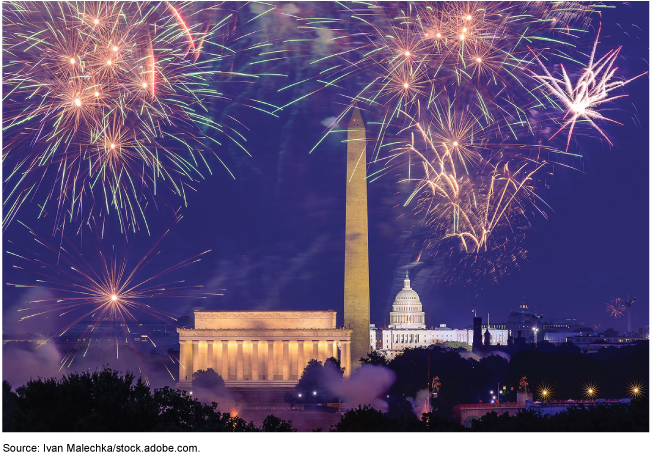 Federal agencies and state and local jurisdictions combined spent millions of dollars for the estimated costs of 2020 Fourth of July events in Washington, D.C., and at Mount Rushmore. The various federal agencies involved in the events included the United States Capitol Police; the Executive Office of the President; and the Departments of the Interior, Defense, Homeland Security, and Health and Human Services. Beyond the federal effort, the District of Columbia Government (DC Government), the state of South Dakota, and local law enforcement played a role in the events.

Fourth of July Estimated Costs for Events in 2020

aGeneral event costs are those that cannot be attributed to a specific event.

Costs incurred were associated with contracts, equipment, and federal personnel, such as costs for overtime pay. Officials GAO interviewed from federal agencies and state and local jurisdictions said they did not incur COVID-19 mitigation costs for the events because personal protective equipment (PPE) and other related supplies used were from existing stockpiles. Federal agencies and the DC Government primarily used annual appropriations to fund the events. The National Park Service also used the Centennial Challenge and Federal Lands Recreation Enhancement Act appropriation accounts to fund portions of the Salute to America and Mount Rushmore events and to cover costs incurred as part of the fireworks display. The DC Government used funds from other available appropriations to cover the cost of events occurring after the obligation of its $18 million appropriation for fiscal year 2020 security costs, including the $1.4 million estimated cost of the 2020 Fourth of July events. The United States Park Police reimbursed state and local jurisdictions outside of Washington, D.C., $35,057 for their costs associated with the events in the District.

During the 2020 Fourth of July events, Centers for Disease Control and Prevention–issued federal guidelines as well as state and local guidelines that South Dakota and Washington, D.C., issued were in effect. These guidelines encouraged event organizers and the public to take a variety of steps to help prevent the spread of COVID-19. Events held on federal property in Washington, D.C., were to follow federal guidelines that included recommendations for social distancing of 6 feet, use of cloth face coverings, and frequent handwashing. South Dakota state guidance was in effect for the events at the Mount Rushmore National Memorial. Federal agencies and state and local jurisdictions instructed their employees to follow relevant COVID-19 guidance and provided employees with PPE. In addition, federal and state agencies made PPE, such as masks, available to the public.

Since July 4, 1776, Americans have celebrated Independence Day through events held in towns and cities across the nation. In the nation's capital, Washington, D.C., visitors have celebrated on the National Mall with federally sponsored parades, concerts, fireworks, and in 2019 the Salute to America. In 2020, additional federally sponsored activities were held at the Mount Rushmore National Memorial in South Dakota. Because of the COVID-19 pandemic, federal Fourth of July celebrations in 2020 required adjustments and precautions in order to mitigate the spread of COVID-19.

GAO was asked to review the estimated costs associated with the 2020 Fourth of July events and describe protective measures taken because of COVID-19. This report describes (1) the total estimated costs that federal agencies and state and local jurisdictions incurred for federal 2020 Fourth of July events, the appropriations used to pay the federal costs, and the extent to which the federal government reimbursed costs incurred by state and local jurisdictions and (2) the protective measures that federal agencies and state jurisdictions took to help ensure the health and safety of the public, federal employees, and other essential workers at the events.

To perform this work, GAO reviewed documentation and interviewed personnel from federal agencies and state and local jurisdictions about their estimated costs and actions at the events in response to the COVID-19 pandemic.