The COVID-19 pandemic forced the Census Bureau to delay its 2020 operations. But in August, the Bureau announced it will deliver apportionment data by December as required. The Bureau faces compressed timeframes, untested procedures, and public safety challenges to do so.

To ensure a complete, accurate census, the Bureau must focus on (among other things):

monitoring ongoing risks to its IT systems 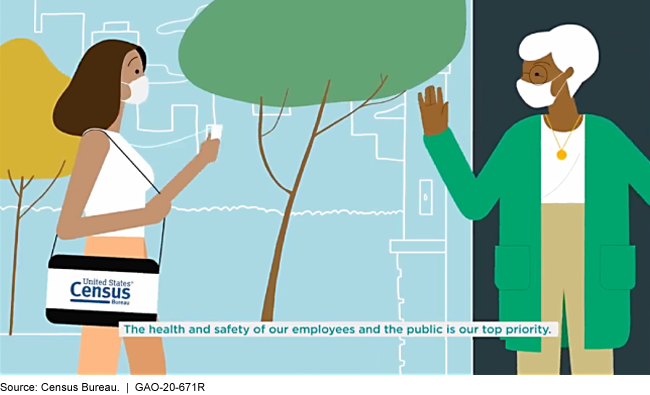 The 2020 Decennial Census is underway after pausing operations in response to the COVID-19 national emergency. As the Bureau resumes its operations, it faces a new set of operational and public safety challenges as a result of COVID-19. These delays, the resulting compressed timeframes, implementation of untested procedures, and additional challenges such as COVID-19 could adversely impact downstream operations, escalate census costs and undermine the overall quality of the count.

In recent years, GAO has identified challenges to the Bureau’s ability to conduct a cost-effective count of the nation, including new innovations, acquisition and development of IT systems, and other challenges. In 2017, these challenges led GAO to place the 2020 Census on its High-Risk list.

GAO was asked to provide regular updates on the 2020 Census. This report examines the cost and progress of key 2020 Census operations critical to a cost-effective enumeration, and early warnings that may require Census Bureau or congressional attention.

The Bureau provided technical comments that were incorporated as appropriate.

This correspondence is the fourth in a series of updates reporting on the Census Bureau’s (Bureau) 2020 Census activities and operations. This update includes information from GAO’s ongoing work on the status of 2020 Census operations and challenges, including those raised by COVID-19.

As part of a series of decisions to suspend, extend, and delay certain operations and extend data collection activities until October 31, the Department of Commerce requested statutory relief on the required dates for delivering census data to the President and states for apportioning seats in the House of Representatives and redistricting for elections. While legislation providing this relief was introduced in Congress, the legislation has not been enacted into law. On August 3, the Bureau announced it would accelerate completion of its data collection and data processing operations to deliver the apportionment counts by the statutory deadline of December 31, 2020. To do so, the Bureau announced it would end all data collection operations by September 30, reducing the amount of time the Bureau has to complete its nonresponse follow-up (NRFU) operation. GAO and the Bureau have previously identified late design changes as a risk to a complete and accurate count.

As of August 10, the Bureau had received responses from 63.4 percent of households and plans to hire up to approximately 435,000 enumerators to follow-up with the approximately 56.4 million nonresponding households.

COVID-19 has forced the Bureau to change how it will conduct its operations. As it implements those operations and anticipates completing them within the new compressed timeframes, the Bureau must monitor a number of areas to help ensure a complete and accurate census, including:

Safety Protocols for the 2020 Census in Response to COVID-19